My friends and I found Cards Against Humanity at a local pub, and it was love at first sight. Such a perfect game. Definitely one you want for your own game collection. And you can print it off the Internet for free! So why not DIY? I thought.

So, I'll start this post by saying that it is a hundred million gazillion times easier to either buy a set online, or download the free .pdf and take it to a print shop to have it printed on actual cardstock. The original set costs $25 and printing it costs somewhat less. But since apparently I am not a fan of easy, I did it my way. Granted, the outcome is nicer than the print shop version, as my cards turned out bigger and are of better shape for holding in your hand, but this is a huge job. Unless you have a paper cutter machine and a laminating machine ready at hand, that is. (I don't.)

So as for me, I cut everything by hand. There are 600+ cards to be cut. Twice, actually, because I wanted to glue the printed paper squares on cardstock, so I had to cut the paper versions first and then the cardstock ones... then glue them together and "laminate" the cards with self-adhesive book cover sheets. Oh right, and then I had to cut the cards for the third time once they'd been covered with the plastic film.

I think I have now used scissors more within a week than during my whole life before I set out on this crazy-ass task.
...Carpal tunnel syndrome, here I come.


I started by printing out the .pdf that is available by clicking the link in the beginning. I printed the white cards out at home, pitying my poor ol' printer that had to churn and whirr and cough up around 25 pages in one go. The black cards I printed out at the university, because why would I use my uni printing credits for school related work when I can use them for something that is a huge waste of black ink! (Taking advantage of the education system rocks!)

In addition, I made some new cards, mostly ones related to Doctor Who, because of course I did. Duh. There are blank cards, both black and white, available at the CAH site. But I wanted them to look nice, so I edited the black ones a bit - the original black cards had a black lining with a white center, and apparently you're supposed to fill in them by hand. But that would have been too easy, so naturally I had to edit them to be completely black, and use white font on top of that.

...A font that I didn't have installed on my computer.

So then I spent half an hour googling to find a free download of Helvetica, because the self-made cards cannot have different font than the original ones! (Did I mention I'm not a fan of easy? Well, I'm not.)

So, once I'd gotten the blank cards filled out with googled Doctor Who ideas, I then proceeded to cut the printed pages into squares. All 32 pages, with 20 squares per page. 640 squares. No kidding.

I had to do one page at a time, because the pages didn't stay aligned well enough to do several at a time. At first I used a box cutter, because it makes nice, straight lines while cutting, but my hands got tired super fast doing this, so for the most part I just used traditional scissors, so some of the squares turned out a bit wobbly, but eh... 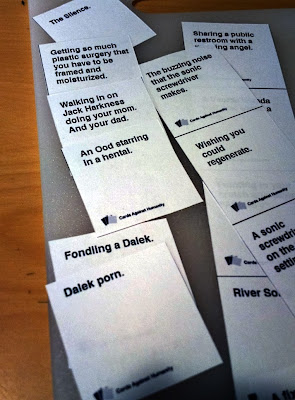 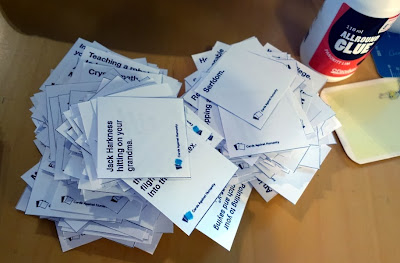 
So, once I'd cut the sheets of paper into squares, I moved on to the cardstock. I used red for the black cards (because I happened to have a lot of red cardstock ready at home) and white for the white ones. The cardstock I could cut with a boxcutter and several at a time, so it wasn't as bad. I just drew a grid of 7.5x6cm (3x2.4in) rectangles on the topmost sheet and traced it with the boxcutter. The cut didn't go through many sheets, but it left a trace of the pattern, so I could easily cut the next one out without having to measure and draw the grid again. 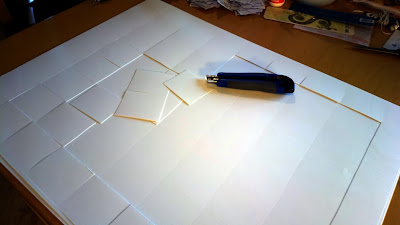 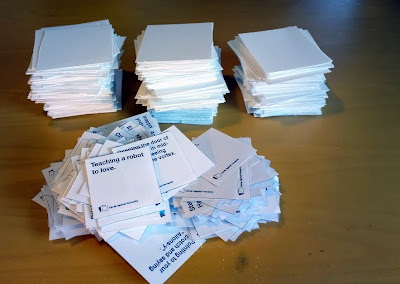 All ready for glueing!


Once I'd gotten everything cut, I proceeded to glue the squares onto the cardstock. 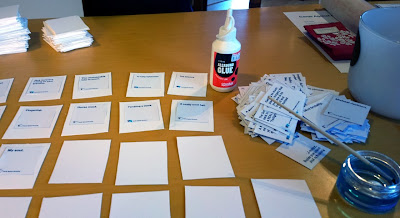 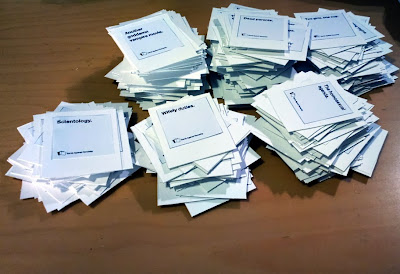 Done with the glue!


Next, I wanted to cover the cards from both sides to protect them and to make them easier to use. At first I tried to cover them one-by-one, but soon realized it would take forever to finish. It took me quite a few tries to find a method that was efficient and wouldn't take the rest of my natural life to complete, but I finally found a way to make the process faster. I pulled off the back of the self-adhesive film and placed cards on top of it, face down. Then I rolled the self-adhesive plastic onto the other side, using a ruler to avoid creases and bubbles. 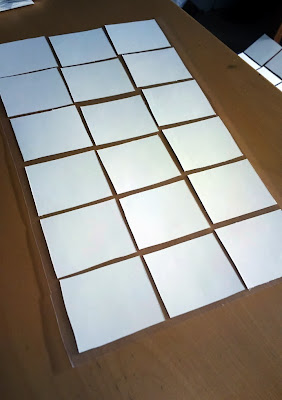 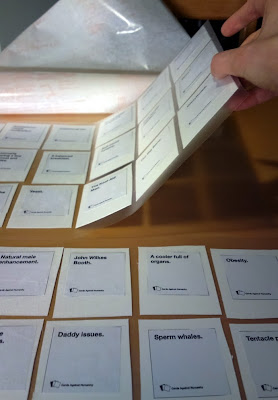 Covered from both sides, ready to be cut. For the third fucking time. 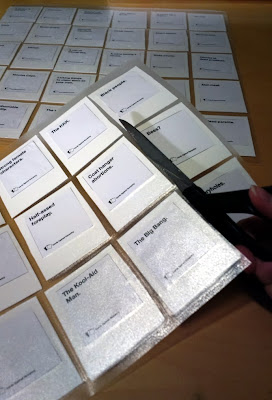 And the rest was pretty much just this. This, this, this all over again until
I never want to see another fucking pair of scissors in my entire life. 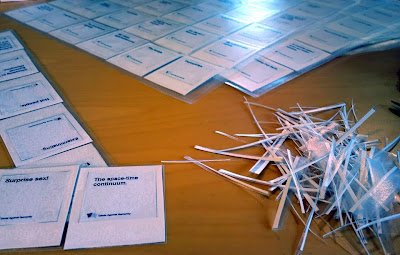 
So it took me a lot of time and even more effort to get this done, but at least the results are pretty cool. 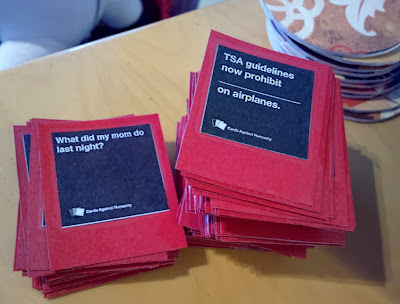 Black cards, ready to use. 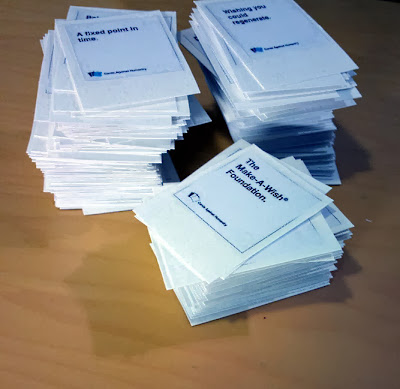 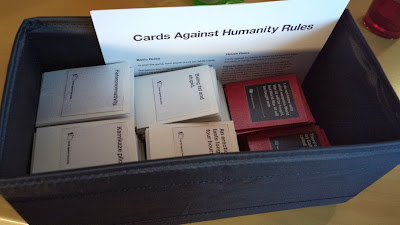 
Finally it is fucking done, and I think I have a lot more gray hair and wrinkles, plus a god-awfully sore wrist. So if you want my advice, kids, don't try this at home. It will destroy your health, psyche and possibly cause marital problems ("Honey, I'm sorry... I was yelling at the book cover plastic, not at you, I swear...!" - True story.)