I found a scrap piece of colorful, see-through fabric at a fabric store sale bin. It was probably a piece of some sheer curtain or dress fabric. It was 1.5m long but there was only a narrow width of it. However, I loved the colors so I bought it anyway. 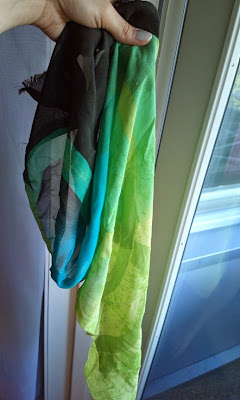 The color turns from black to blue to green to yellow - such lovely, summery hues.

I decided to make a light summer scarf.

First I pinned the fabric lengthwise, right sides together. 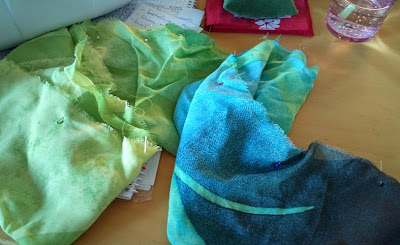 Then I sewed the long sides together, and turned the long tube of fabric the right way around again. 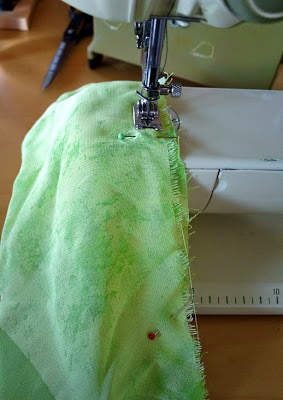 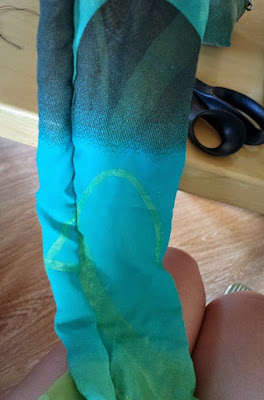 Then I pushed the yellow end inside the black end of the tube and turned the raw edges of the black fabric in. I sewed over the hemmed edge, simultaenously attaching the ends together. Like so: 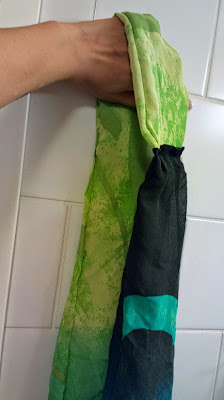 Now I have a feather-light infinity scarf for summer use: 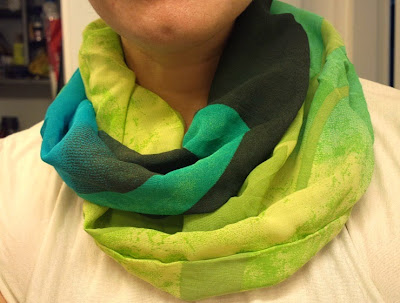 Posted by scoundrel at 6:47 PM No comments:

That's SEW awesome (pun intended), a.k.a. the "I have no idea what I'm doing DIYs"

This spring, my mother gave me her old sewing machine. The damn thing weighs around 20 kilos (~44 lbs) and clocks in a sweet career of over 50 years. Seriously, it still has the original manual with the date of purchase written in it - which was in 1963. This machine is an Iron Lady if there ever was one, and still runs (or sews) like a dream. 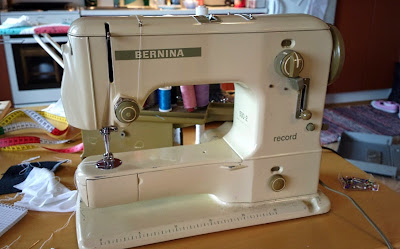 Sweet ol' Miss Bernina in her shades of olive.


At first Miss Bernina sat in her box for a few months, but then I ordered a dress online and wasn't very fond of the neckline. So I decided to try and alter it myself, rather than either let the dress sit in my closet or pay someone else to do it. It took me a couple of tries and a lot of browsing that old manual, but eventually I figured out how to get things done. My first DIY refashioning was a modest one - deepening a strangling boatneck into a v-neck. 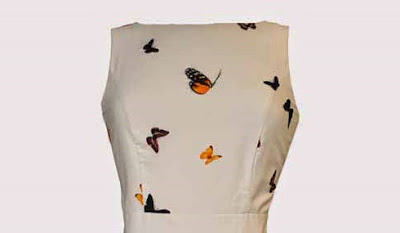 This is what I started from... 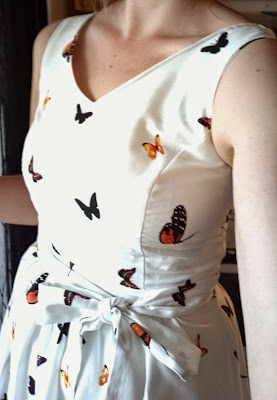 
After that, it was a small step to broaden my horizons and put my nonexistent sewing skills to the test. This needs perhaps a little bit of explaining. See, Ropecon (a role playing convention) was fast approaching, and I didn't have a costume. So I decided to make one myself! Can't be that difficult, right?

Note that the last time I'd even looked at a sewing machine or clothing patterns was somewhere around the age of fourteen, so another fourteen years had passed without me doing any sewing, except for some minor sewing by hand.

I knew I wanted to do something Doctor Who related, because of course I did. I also wanted it to be somewhat comfy and easy to be in, because after every single Ropecon I've sworn an oath to not to wear a costume that requires a corset next year... and lo and behold, next year I'd be there in a corset, very uncomfortable once again. Well, not this time! 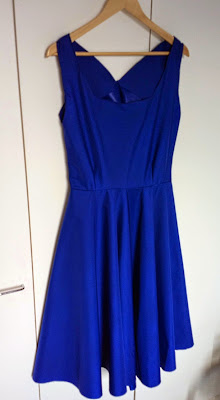 Can you guess where I'm going with this one? 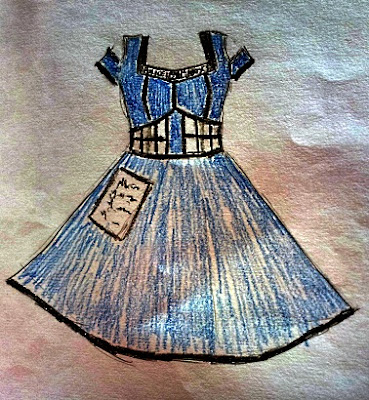 
I googled "TARDIS dress" and I came across this wonderful plan for a dress. I then sketched my own plan on a piece of paper, and I used two existing dresses to make patterns for it. Out came that blue dress. It is by no means perfect. The zipper in the back is a bit loopy around my waist, and the side pockets are rather low on the side seam. But well, considering that this was essentially the first thing I'd sewn from scratch in 14 years, it isn't that bad. Now all it needed was the black and white decorations to make it a TARDIS dress instead of just a blue dress. 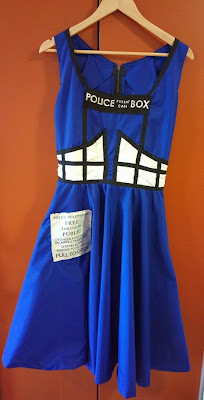 
I gave myself some serious patting on the back after I finished this dress. It's pretty much as perfect as I could have ever imagined. For something I made myself, of course. And it doesn't require a corset! HUGE-ASS BONUS RIGHT THERE.


So next, I decided to make another costume, because why the hell not?

This costume is not done yet, except for the clothes. There is still a liquid latex head coming along, but that's not finished. But seriously, check out what I managed to do as the second DIY sewing project after 14 years: 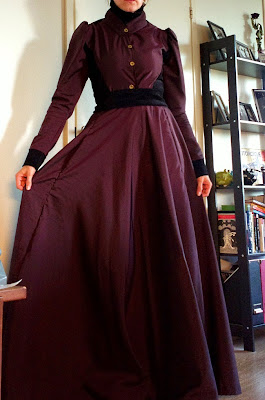 It's actually a two-piece dress. The skirt is a 3/4 circle skirt, with a zipper in the back. Hemming that skirt was a bitch, I can tell... because it's almost a full circle, the hemline is something like 6.5 meters (~22 ft) long...

The jacket part started off with this in mind: 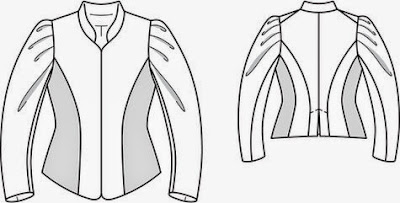 
After excessive measuring of my own body parts and jackets that I own, my own plan looked like this: 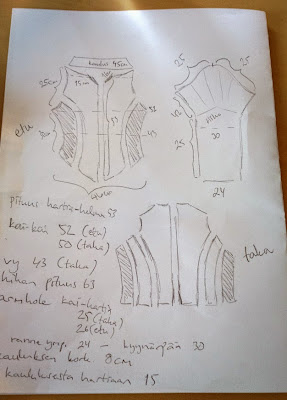 So I set out to draw my own pattern using those measures. It was a little bit of a trial and error, but it turned out okay. The jacket doesn't have a lining and the seams don't really stand careful scrutiny, but it looks okay and that's the most important thing for me right now.

The hooded cape I made using this tutorial I found with the help of Google.

So now I have not one, but two costumes for Ropecon (if I can finish the head of the latter one in time...) The TARDIS dress cost me about 10 euros (~$14) altogether, as I found the blue fabric in a sale bin at the fabric store. The longer dress and the cape were a bit more expensive, coming in at about 50 euros (~$70) together.


So, now I had established that I wasn't completely hopeless at sewing. So the last few days, I've found myself doing more and more DIY sewing projects. For example, a top I refashioned originally had long sleeves, but I ripped them off and gathered the shoulder parts with some bias tape and a cute button. 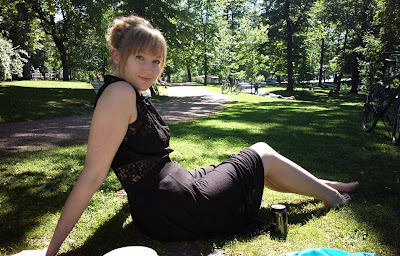 You can't really see what I did here, but it's a lot nicer now, I swear!


Another refashion I did for a shirt was to cut a hole in the back and hem the edges, like this: 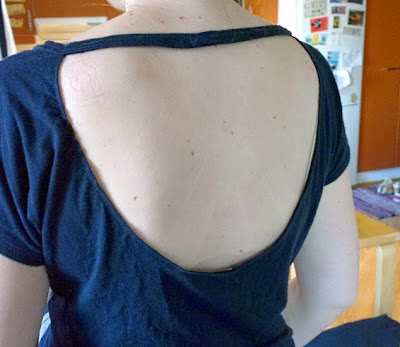 I did a bunch of t-shirt modifications, and decided to visit the local Goodwill store to see if I could find something else to modify.

Instead, I found that the Goodwill also has huge bins of all kinds of scrap fabric. For a moment, I felt like a kid in a candy store. I found a decorative pillowcase and several pieces of scrap fabric in different colors.

Then I found two pieces of print fabric with a Japanese style print. Totally gorgeous. They were 1.5 m wide and 0.5 m long, and I contemplated if I could possibly make a skirt out of them.

Turns out I totally could: 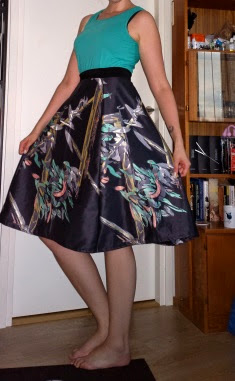 
Then there was the pillowcase with a fun print. I decided to make a clutch purse, because I'd seen a tutorial and wanted to try it. I also added a pocket on the inside, using this Youtube video. The total cost of this purse was around 3 euros ($4), zippers and all included. 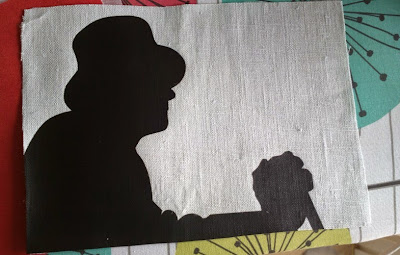 A fun print for the front of the purse... 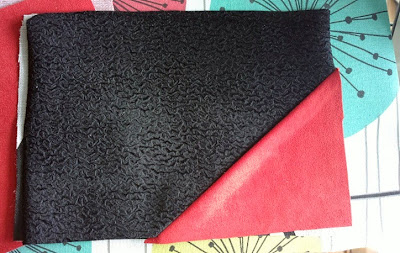 ...and a graphic red-and-black for the back.
(By the way, the black fabric here is a scrap I had left over from the hooded cape. So the cape also has this subtle pattern on it.) 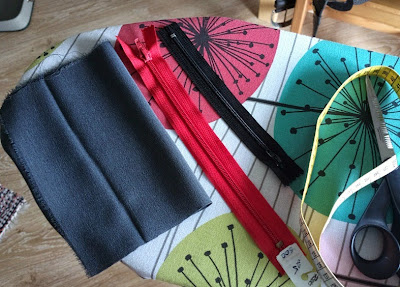 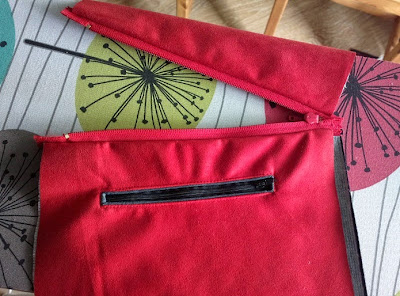 Here I've sewn the zipper and you can see the pocket I've made.

All done and ready to use!


So yeah, you could say that I'm more than a little bit excited about sewing these days. It's so nice to have a hobby where you can see the end results forming as you go. And since I am on forced vacation (couldn't get a summer job), I might as well do something useful with my time. Yay for sewing!