In my last post I posted about the cosplay I made for this year's Ropecon. Here are some better pictures of said costume: 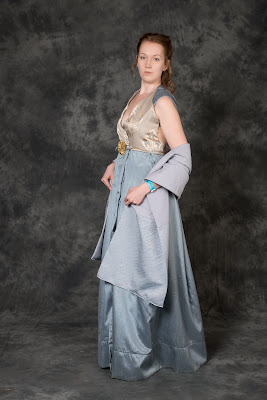 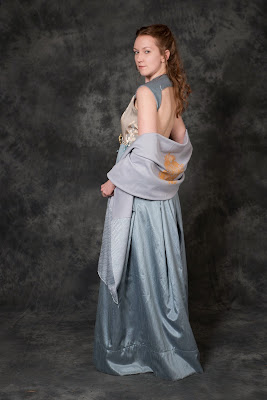 (Both photos by Kyuu Eturautti.)


Also, here's a picture of the hairdo, because I think it turned out pretty nice (considering Natalie Dormer wears a massive wig to play Margaery and I only had my own hair to work with...) :P 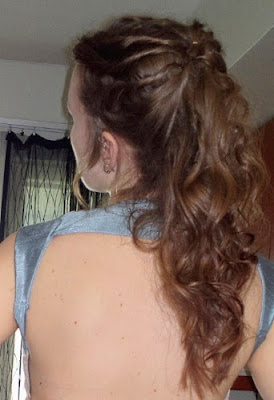 I did a slightly modified version of this YouTube tutorial. And by "modified" I mean "simplified". :D Meaning I didn't bother to take the bobby pins out of the twists and tie them into a small ponytail; instead I just left the bobby pins where they were and added the second ponytail on top of them and twisted it around itself once. But I rather like the way it turned out. :)


So, I managed to finish a skirt-to-dress remake today, and about time, too. This one had been waiting for its transformation for about a month.

I started with this thrifted maxi skirt (I think it was handmade by someone, I simply loved the pattern and the colors): 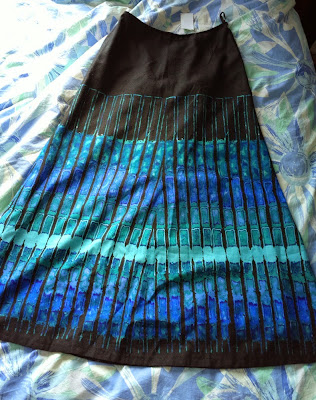 Sure, it would have been good to use as-is, but I'm not a fan of maxi skirts since they are always a bit too short for me and look rather silly.

So I measured from hem up to get the desired length for the skirt part of the dress and sliced the skirt: 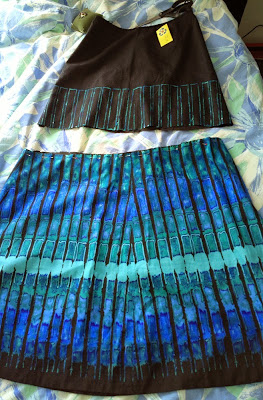 Then I cut the top part: 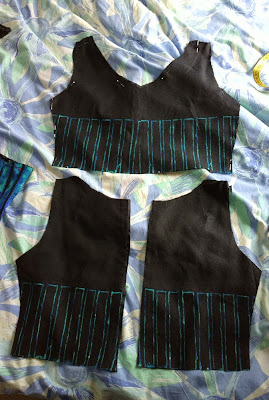 I decided to make a side cutout dress, so I chopped off small triangular pieces from both the front and the back pieces, then sewed a lining all around the pieces and turned them the right way round. Sadly I forgot to take pictures of this...

Then I sewed basting stitches around the lower part and gathered the fabric until it matched my waist. 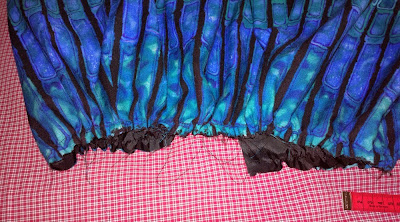 I added a waistband of plain black fabric and attached the top pieces together and then onto the bottom part. Lastly I added a zipper, and lo and behold, maxi skirt turned into dress: 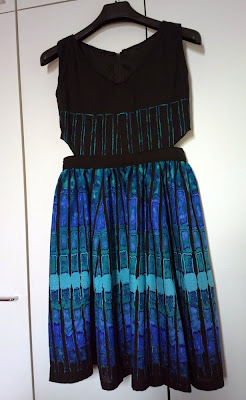 Here's how it looks on me: 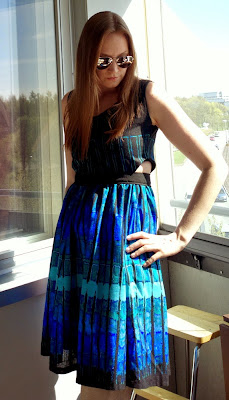 Hello everyone,
Every year my husband and I go to a Finnish convention called Ropecon (the word "rope" there refers to role playing which in Finnish is roolipelaaminen, so the convention has nothing to do with those kinds of ropes you use to tie someone up. Well, unless bondage while in a costume is your thing I guess?)

I usually dress up for Ropecon: 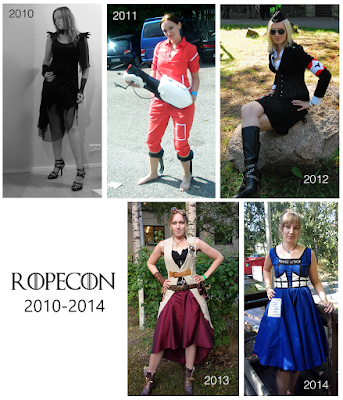 
This year, I decided early on that I wanted to be someone from Game of Thrones. And well, Margaery is pretty awesome, so why the hell not? ^_^

So I started out by scouting suitable fabrics for one of Margaery's dresses.

The fabric I found for this project: 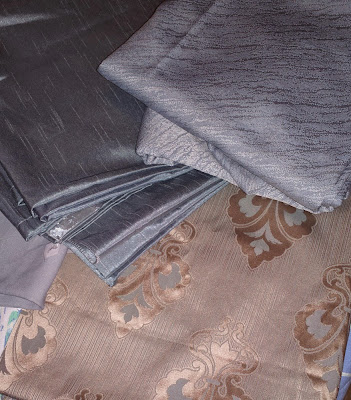 Note that all of the fabric is from a thrift store. All fabric, zippers and materials for the belt were thrifted, so the pattern of the fabric for the top isn't exactly how it's supposed to, but it's close enough. Altogether this cosplay cost me ~18 euros (~$20.50).

So, the lighter blue fabric with silvery streaks was actually a pair of curtains and they already had gathering with strings sewn into the top part, so I used that for my advantage to make an underskirt. I simply sewed the curtains together at the sides, added a zipper on one side, pulled the gathering strings to fit my waist, shortened and hemmed the bottom - and boom! I had the underskirt ready. 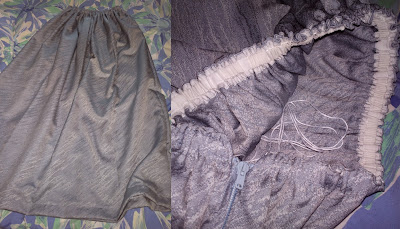 On the right you can see the gathering the fabric already had when I bought it.


Next I made the top part: 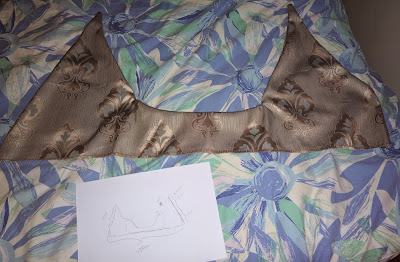 I designed the pattern on paper and then measured and cut the fabric twice, sewed them together right side to right side and turned the whole thing inside out... and if that piece up there looks a bit weird, it folds like this: 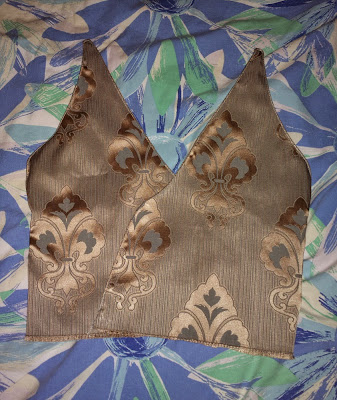 Looks more like a top when folded, doesn't it?


Then I had to make the shoulder parts and the piece connecting them at the back: 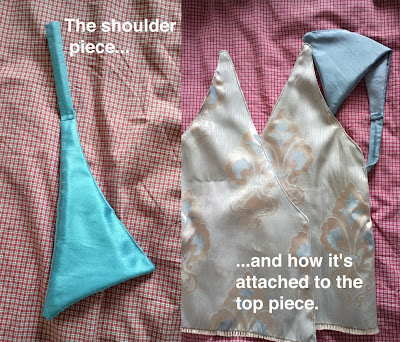 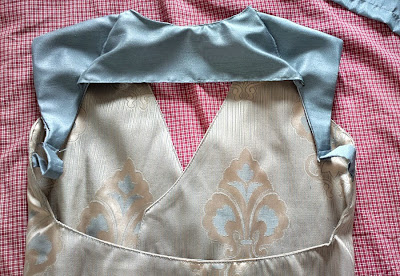 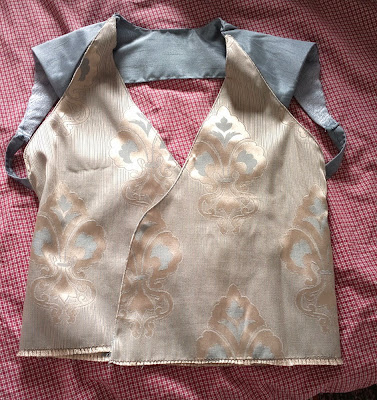 
I used the slightly darker blue fabric (that was on the top left corner of the fabric stack picture) for the shoulders and back, and the remainder of this fabric would be the actual skirt to be attached to the top. I would have used only this for the skirt part, but it was (also) a curtain and additionally a slightly see-through one. So hence the underskirt I made in the beginning was necessary. I simply sewed big darts (about 30 cm long and 20 cm wide) all over one side of the curtain until the fabric fit my waist comfortably. Then I attached this to the top part: 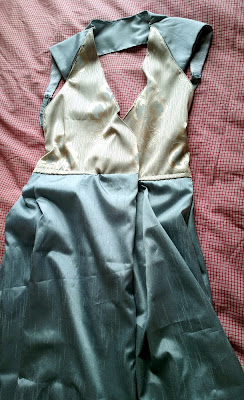 At first I thought I'd be all historically accurate and use hooks and buttons and whatnot, but then I got lazy and this hidden zipper happened: 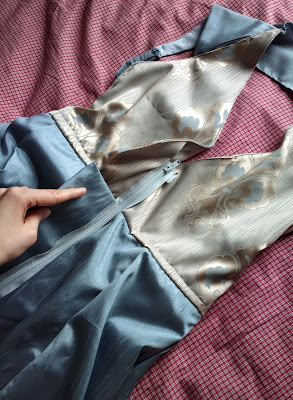 Then I added hidden snap buttons and other sneaky stuff to keep the fabric in place and prevent the zipper from being visible. 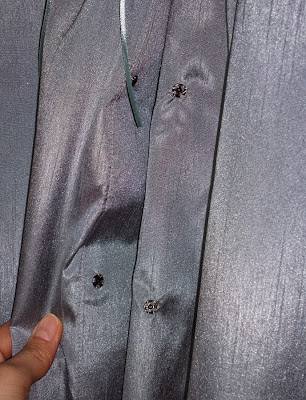 Lastly I used a thrift-store found thick wire and a clay flower to make the belt. I covered it all in gold spray paint: 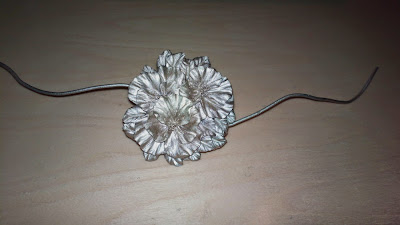 The belt is held in place with three pieces of string I sewed onto the waist of the dress: 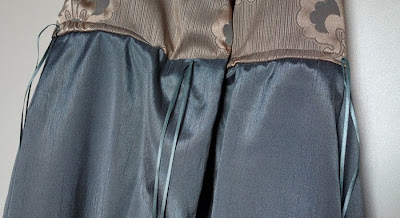 Here's the finished dress hanging off of a coat hanger: 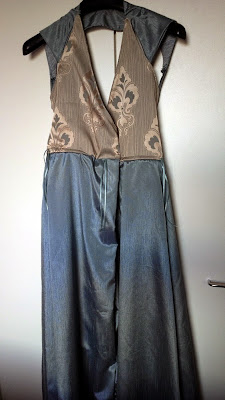 And since it's May and in Finland that means still very much freezing, I also made this scarf/wrap so I won't freeze to death:

All wrapped up and ready to go: 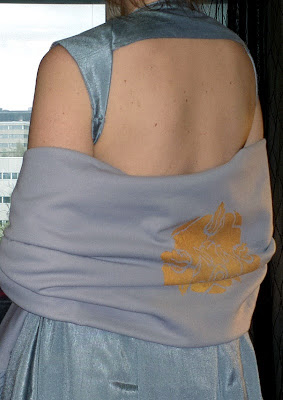 I will post better pictures when after I've actually gone out wearing all this :D ...but well, what do you think? :)

Hey all,
I haven't been getting much sewing done lately, but I did finish this 50's style dress - and just in time for the warm weather (that's hopefully coming soon, right? :P)... So nothing geeky this time, but I promise there will be a geek-themed sewing project coming soon!

My dear friend Stormiina hosted a Blast from the Past themed party, so naturally I had to whip up something to honor the 1950's. I mean, it's not like I have enough 50's style dresses... *ahem* :D

Without further ado, here it is: 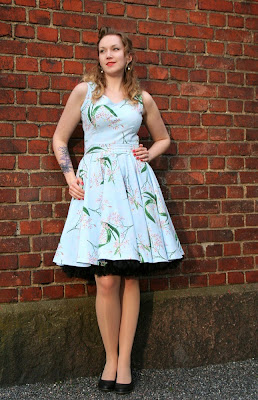 Naturally I had to do makeup and hair to go with the dress: 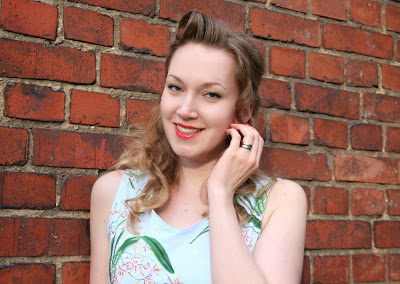 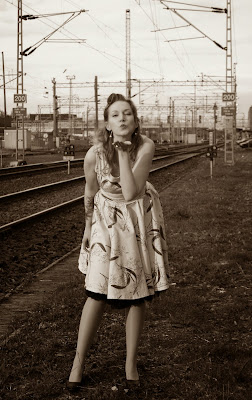 
The first three photos are taken by Stormiina, the following ones are courtesy of self-timer + my phone (which was standing on my clothes drying rack and leaning on a box - I can get very innovative when I need to take photos :D). 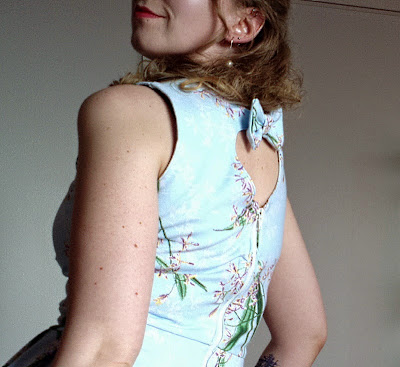 I added a cutout and a cute bow in the back.