Orange slices and chevrons - a matching summer top and skirt 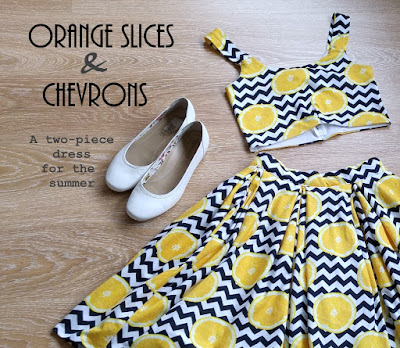 
Hey all,
So last weekend we celebrated our student organization's 10th birthday and I was wearing the dress I made for it and I used the no-sew book clutch as my purse (and I wanted to show them off. DIY recycled outfits for the win! :D) 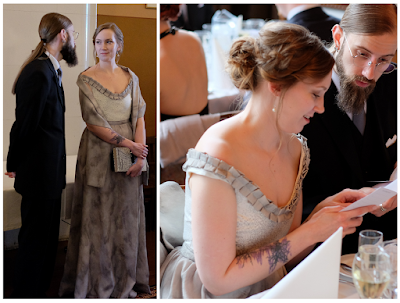 
(Also in the photos: my hairier half, my significant otter, my Rasputin-risen-from-the-dead... aka: The Husband.)

The evening was fancy and I felt like a princess in my ensemble... A very book-smart princess who carries a Tolstoy novel with her at all times. :D


So, after the weekend was over I got sick like BAM!

Seriously, on Monday I got acute laryngitis that robbed me of my voice in six hours and landed me in the ER in the middle of the night because everything in my larynx area was so swollen it felt like I couldn't breathe. The feeling of choking lasted for another day (though they looked into my throat and said there was plenty of room for air to pass through), and after the worst of the laryngitis was over I got the common cold symptoms - the coughing and the sneezing and the wheezing. Not fun.

So I've been sick and stuck at home for four days, and it's made me kind of stir-crazy. I've been bored out of my mind and yet too weak to actually do anything. So I've just watched Firefly and surfed the internet mindlessly.

On Saturday I finally felt okay enough to do something. So I got to sewing.


In January I ordered this fabric with a print that's designed by Annika Victoria. 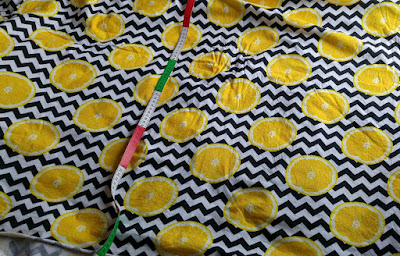 The fabric took quite a long time to get to me (which is not the real problem as custom-made orders usually take time) - but the customer service of the online store was kind of awful. I don't want to bash the store by name so I simply won't link to them at all. (If you want to know the name of the store, email me. You can also probably find them through Annika's channel though.) The awful customer service aside, the fabric is good quality and the print is clear and crisp and the colors are vivid. It's a stretchy cotton jersey, and even though it looked like it had been pre-washed already, I always wash stretchy fabrics before sewing anything of them in case the fabric shrinks (and to get rid of possible leftover chemicals and such). So I tossed the fabric into my washing machine and gave it a good wash in 60C (140F). It came out of the machine and it hadn't shrunk and the colors were still as clear as they'd been before. So thumbs-up to the quality of the fabric, thumbs-down for the customer service of the online store.
Edit on Apr 20th: I have been contacted by a representative from the online store to find out what went wrong with my customer service experience, so that's positive. Essentially what was wrong is I didn't get information on my order, and when I asked about it and was promised an update "as soon as possible", they never got back to me before I sent another email asking about it after a week had passed. Looking back on it, the shipping didn't really take super long but I thought it did because I didn't get the info about it until the order was nearly at my doorstep. What really was wrong was the flow of information my way - or lack thereof.

So anyway. I had two yards of the fabric and I was wondering what I would make with it. Something for the summer for sure, but what? A dress?

I'd thought of making it into a nice summery dress, but then I found this picture and knew immediately that I wanted the fabric to be a two-piece like that. That way I can use the top and bottom pieces separately as well as together. Brilliant!

I made a pattern for my crop top using an existing top. The straps (wider than in the inspiration picture) are cut separately, but aside from that the top is just one piece - no side seams and the only seam is at the back where I planned to put a zipper. By doing it this way I was able to line the top entirely without any seams visible. 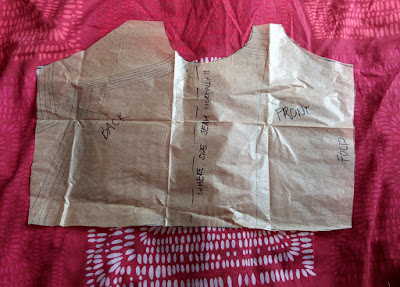 The pattern was made by laying a tank top on paper with the side seams on against each other and the front and back stretched outwards so the side seams were in the middle. The length can be determined by wearing the top, then measuring down the side seam to how long you want the top to be. The fabric is then cut on fold at the front and you get a one-piece top.

I also cut another top piece from white stretchy fabric for lining. Then I cut the straps. 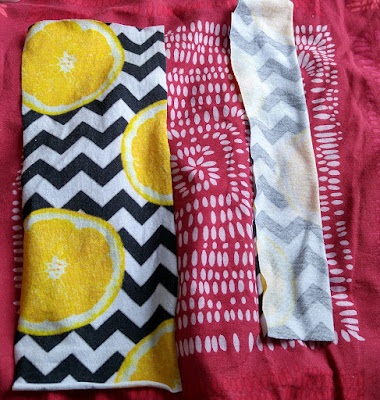 I'd measured the length of the straps from the top I used for pattern. I folded the straps length-wise, right sides together, and sewed them into tubes. I then turned the tubes inside out and ironed them so the seam was in the middle. 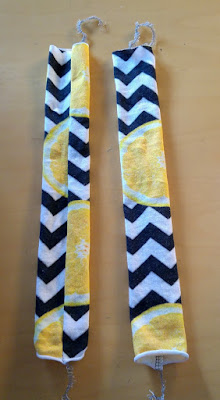 The straps were pinned on the top piece, raw edges and right sides together (the seam in the middle of the strap up). 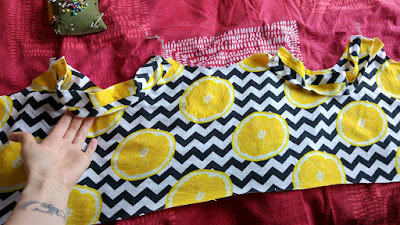 The straps can be sewn on at this point, but I was lazy and decided to skip that step and instead pinned the lining on top of the whole thing. The straps are sandwiched in between the layers of fabric that are facing right sides together.

The red line shows where the straps are.


I then sewed the lining and the chevron fabric together like this:

The red lines show where I serged the pieces together, careful not to catch the straps (gray lines) except at the ends where they are supposed to be sandwiched between the lining and the chevron fabric so they get attached to the top when I sew the pieces together.

Through the open ends, I turned the top inside out and ironed, and then I had this: 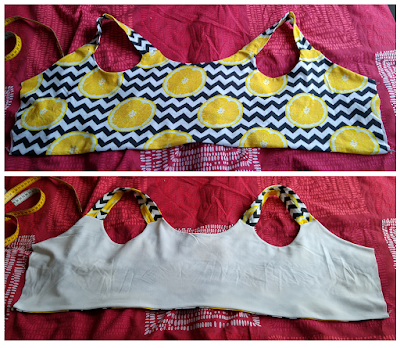 I folded the raw edges at the ends in and inserted a zipper. I could have just sewn the seam shut because the fabric is stretchy enough to put the top on without a zipper, but I wanted it as a decorative detail. 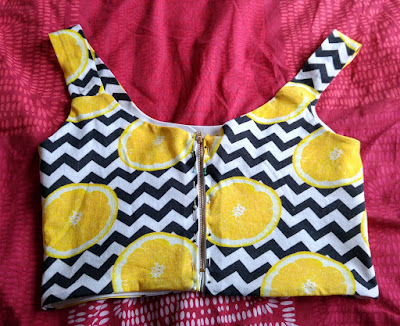 So then the top was done. (I ended up adding a small dart at the bottom of the front center, because the top was too loose at the hem without one. I could have made two in the place of usual darts but I like how the dart in the center gives the hem a sort of concave shape when combined with the skirt.)

On to the skirt!

I cut two rectangles of the fabric, 60cm tall and as wide as the fabric (140cm). I also cut pieces of same width from the lining fabric, only shorter so the lining is not visible beneath the skirt hem. The lining is this stretchy fabric that is kind of shiny and very slippery (like the kind you sometimes find in certain type leggings/leotards). I needed something that would be slippery enough so that the hem of the skirt wouldn't end up crawling up my thighs when I walk (cotton jersey tends to do that.) I sewed the short ends of the fabric right sides together, skirt fabric and lining separately. Then I placed the lining inside the chevron fabric and cut a slit to mark the center back (where a zipper will be added).

The I pleated both the fabrics together. Since there was a lot of fabric to pleat, instead of regular box pleats I made double box pleats. With two thick jersey fabrics double pleated like that, there were altogether ten layers of fabric to be sewn over in a pleat! It was quite the task, but luckily my old faithful Bernina managed this without any trouble. 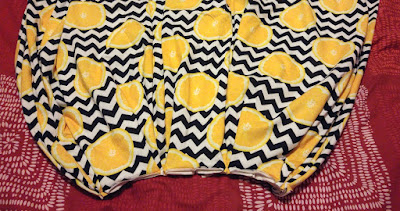 Then I folded a waistband and attached it, adding four more layers to the bulk! But my sewing machined survived that too. It never ceases to amaze me. 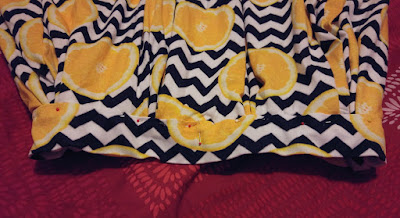 After that I simply added a zipper and hemmed the lining and the skirt fabric separately and the outfit was done! 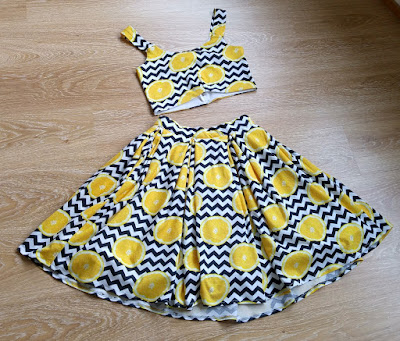 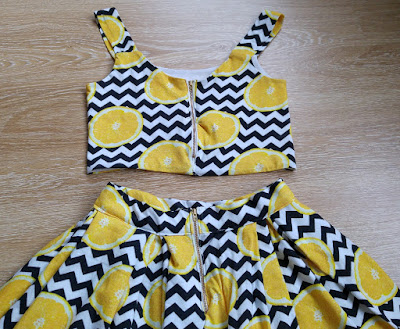 Here's how it looks worn (sadly it's still way too cold and rainy to wear it outside...) 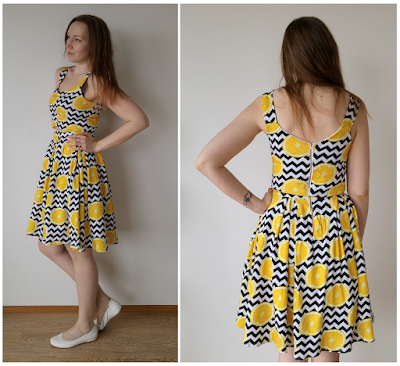 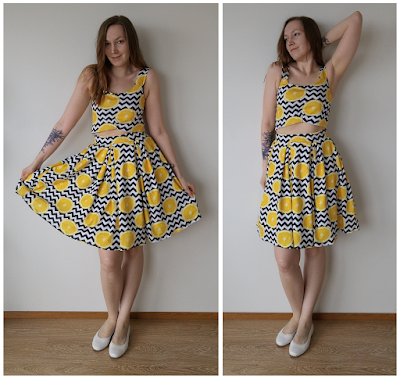 I love how this turned out, and I can't wait for summer so I can actually wear these pieces outside. :)


What do you think of this summer ensemble?