It's been a long while since I've posted anything... November was insane, studying-wise, so I mostly just studied, stressed, wrote essays, stressed some some, slept and repeated. Like that Tom Cruise movie tag line. Study. Stress. Repeat. Or something like that.

So this is just a quick update to let you know I'm not dead. In fact, my holiday break started a few days back, so now I can simply relax until January... and that relaxation was needed, I can tell you. Really, really needed.

So I haven't done much creative stuff lately, since I haven't had time and in my experience nothing kills creativity as quickly as stress. But hopefully I can get back to more sewing and such soon!

Anyways, here's some things I have done (or gotten done!) lately: 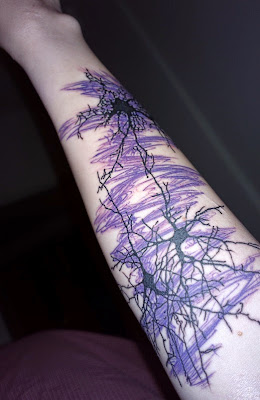 It depicts nerve cells on a sound wave. The two ends of speech process, or my vision of it. Nerve cells synapse in the brain, sending information to the muscles of the larynx, the muscles move the vocal folds closer and air comes out of the lungs, creating differences in air pressure levels which we then perceive as sound.

So, nerve cells and sound - makes sense, doesn't it?

I kind of wanted a tattoo that has something to do with my future occupation, and I think this is pretty good in that aspect. The above picture is taken on day 1, right after I removed the wrap, but I'll post better pics once the damn thing has stopped peeling like mad. :D


2) I finally had time to do some sewing again!

Stress + lack of time = me not doing any sewing projects. But the other day I spotted this picture online:

That shirt dress looked so comfortable that I wanted to do something similar. Luckily I had a piece of stretchy knit fabric that was striped. So I simply took an existing shift dress I had and used it to measure and cut out the pieces. I made the sleeves extra long because I never get to enjoy sleeves that are actually long. What with me being a giant and so on...

So here's the result: 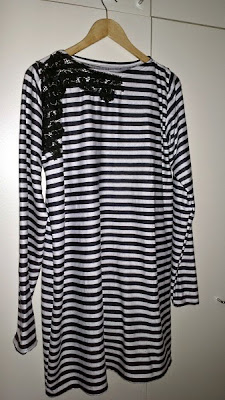 It may not be the most flattering dress for my figure, but damn that thing is cozy. It's like a soft nightgown, but you can wear it outside your home! Like, you can actually go out into the society wearing it and it's completely okay. Comfortable and socially acceptable. Now that's a win-win right there. 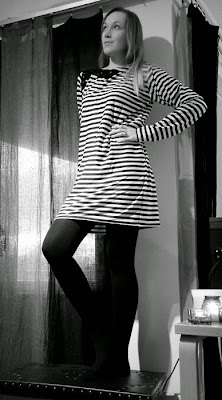 Seriously. So comfortable.
(And yes, I'm standing on a chest because I was bored with taking pictures in the same places every time...)


So yeah, I just wanted to let you know I'm still alive and sort of kicking... although right now I'm mostly just kicking back and relaxing, because for the first time in two months I can actually do that. So once I've managed to get less sleep-deprived I might actually write more blog posts. But right now, I think I'm going to bed. At 10 PM. Yes, I'm that old.

Labels: DIY, dress, me myself and i, sewing, SLP, uni life