Oh look, it's a new year, new semester, and another Lord of the Rings dress!

So, first 9 days of the new year are behind, and I've already managed to catch (and get rid of) a nasty cold. I woke up last Sunday feeling like the insides of my nose and throat had transformed into sandpaper. Not a nice feeling, that one. So by Wednesday I was sneezing and dripping my brains out through my nose (or so it felt), but luckily my immune system has almost kicked the bug out, so I'm feeling better already.

Spring semester started two days ago. Thankfully we had a nice, smooth landing--

"Introduction to statistics" started at 8 AM right after the holidays. Oh joy. Additionally, it wasn't even a proper class, but rather a 'motivational start' for the course. Had I known that, I would have stayed home and gathered my motivation in bed. Ugh.

Well, statistics aside we do have some interesting classes this spring. We'll learn basic signing to use with kids who have SLI (Specific Language Impairment), which is interesting as I've always found sign languages fascinating. Note, we don't learn a sign language, but we learn to use signs to support speech when an SLI/Down/etc child needs visual aid to be able to understand what's being said to them. You can check out the Wikipedia page for Augmentative and Alternative Communication (AAC) if you're interested to find out more.


So, onwards to sewing matters!

I got super excited when the first Lord of the Rings dress and the Game of Thrones Stark Sigil dress turned out so well, so then I wanted to do more fandom-related stuff. So naturally, I went back to Tolkien.

I feel like I'm such a bad fan for still not finishing The Silmarillion, but I've read some of it. Enough to twist and turn this idea of a color block dress and the White Tree of Gondor, and turn it into a sketch that looked like this: 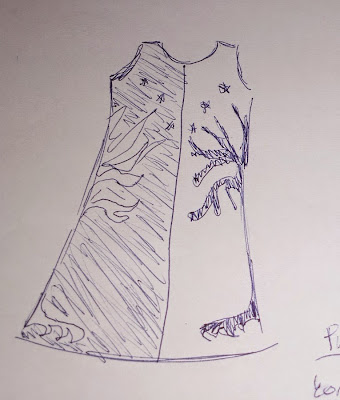 
See, I decided to use the White Tree of Gondor symbol to make a dress of the two trees of Valinor, Telperion and Laurelin. For those of you who don't know what those are, they are essentially trees that give light, a representation of the Sun and the Moon (actually, in the lore, the trees are destroyed but the last flower and the last fruit of the trees are used to create the Sun and the Moon.)

First, I had to get some white fabric - I already had black fabric and the fabric paints I needed for this project.

Then, I had to figure out how to cut the fabric when I wanted the seams in the front and the back and not at the sides like they usually are. You'd think it's easy, but wrapping my head around the fact that the fold of the fabric was on the "wrong side" was quite difficult. Well, I managed to cut out two identical pieces, one black and one white: 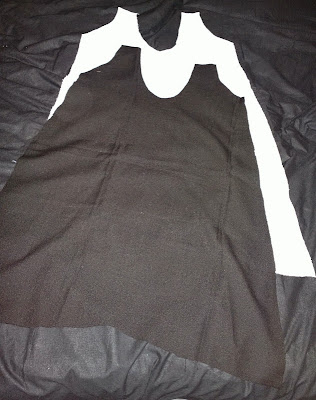 Note that what looks like the neckline is actually the armhole.

So then I had to draw and cut out two tree stencils. I measured the maximum size of the tree on the fabric, then went ahead and found this stencil:


I simply zoomed in on the stencil on my screen and drew it through on self-adhesive book cover plastic, holding it against my laptop screen. Then I placed another sheet on top of the already drawn tree and drew another, and so I had two identical trees. I added a crescent moon on top of what would become Telperion, and a round shape representing the Sun on top of Laurelin (after I took this photo, of course). 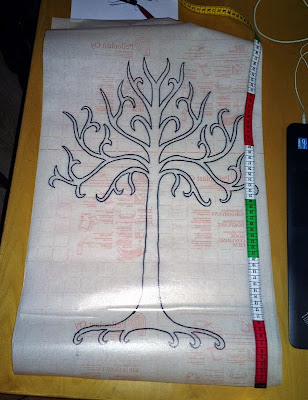 Momentarily I considered buying gold and silver paint to do the trees the way they're actually supposed to be colored, but since I'm not a fan of metallic prints, I figured the dress would get a lot more use if I just painted it in black and white.

Once the stencils were drawn, I cut them out using scissors. 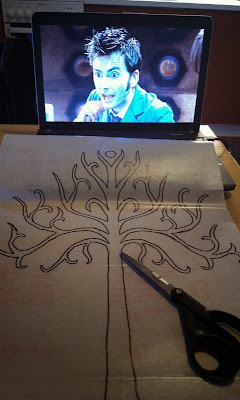 (I may have watched some of Tennant's Doctor Who episodes while I was doing this. Because, you know, David Tennant.)

Then I flattened the dress pieces on the bed. Why on the bed? you ask. Because then I could pin the fabric onto the bed to keep it in place by sticking pins through the fabric diagonally (like staking a tent, if that makes any sense). I put old magazines beneath the fabric to prevent the paint from staining the bed. 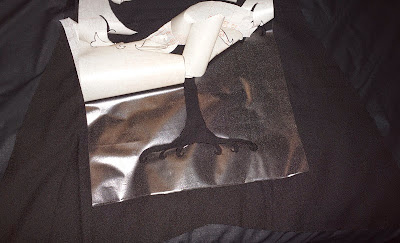 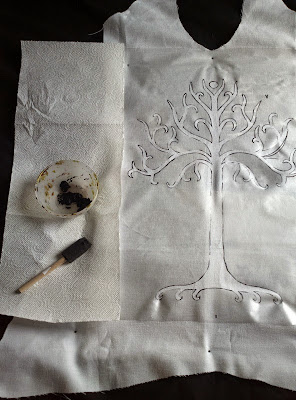 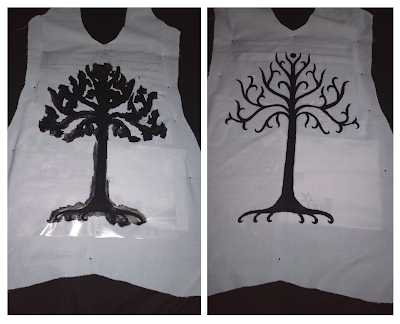 Then I waited for the trees to dry and ironed them. After that, it was time to assemble the pieces and add lining (because the white fabric is practically see-through; check above picture if you don't believe me). I first sewed the front seam of the dress to form one piece, then cut out the lining, in two pieces, and sewed those together at the font seam as well.

Lining goes on the fabric, right sides together, sew the edges aside from the bottom edge, turn inside out and admire your lined dress! 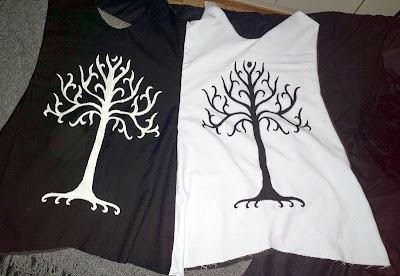 ...which still needs to be sewn together at the shoulders and the back. Also, zipper. And hemming. And top-stitching the armholes and the neckline.

So I did that. No pictures of this happening because this is not a tutorial and hence nobody cares.

So, without further ado, I give you my Lord of the Rings: the Trees of Valinor dress! 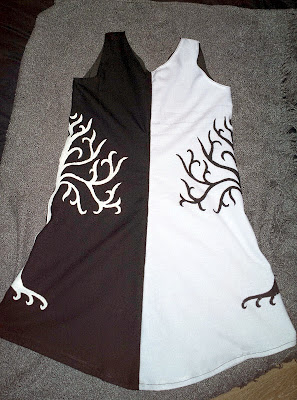 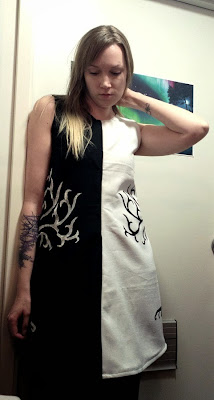 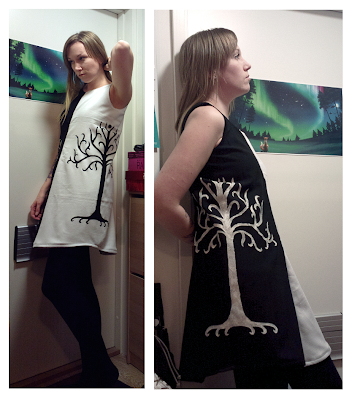 I think it's pretty cool. What do you think? :)

I actually wrote a list of fandom-related ideas I'd like to make into clothes. So far the list contains such items as Harry Potter, Doctor Who, Firefly, Sherlock, Studio Ghibli, The Hunger Games, Marvel Avengers... etc. There's also more Tolkien and more Game of Thrones, but perhaps something else for a change... :D

So if you have a suggestion from the list or something else, concerning which fandom should I next dive into and unleash my creative powers upon, please leave a comment! And comments about my Trees of Valinor dress are also more than welcome!

PS. I know this dress isn't exactly "Lord of the Rings", but since I borrowed the tree silhouette from Gondor, I reserve the right to call it Lord of the Rings dress :P
Posted by scoundrel at 10:07 PM