Hey all,
The giveaway participation ended last night, so this morning I did a raffle to find the winners!

So I collected the emails of those who signed up for the raffle and put them in a Word document. If you had three tickets, then your email was in that document three times etc. I simply wrote those emails down into a list and made the list numbered. Then I wrote the numbers on pieces of paper and had my half-asleep husband stand in as Lady Fortuna once more. He pulled two numbers out of a coffee mug, the first number standing for an anonymous user, and the second for Anne. Emails have been sent to the winners.

So, Anon user got the Cube, but I mentioned in my last post I had a surprise runner-up prize as well. See, I had a canvas bag left over from the last giveaway, so I made this: 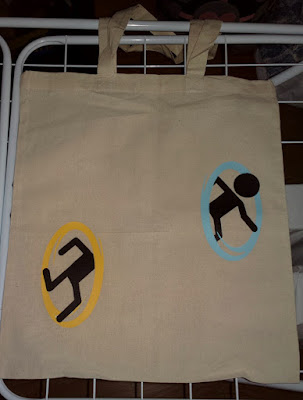 This bag will be sent to Anne and the Cube to the anonymous user.

Thanks to everyone who participated, and stay tuned as I will be hosting more giveaways in the future! :)

Posted by scoundrel at 8:35 AM