I know I made a Stargate backpack just last fall, but I decided it was time to make a new backpack because the old one is kind of hastily made and there are several parts about it that I don't really like. For example, I didn't bother to use interfacing so the backpack is kind of slouchy and doesn't hold its shape very well. So this time, I followed instructions on a Finnish blog called Villa & Villa and made a Fjällräven Kånken replica. This time around I used iron-on interfacing, and it really did help a lot!

In fact, the interfacing was the only part of this project that was bought new! (I used about 3€ worth). Everything else was either bought secondhand, gotten for free or made of things I already own. Thumbs-up for recycling!

- The main fabric is a thrifted tablecloth (4€ - I used only about 1/5 of the entire tablecloth, though, so 0.80€ for this project).
- The lining is also thrifted fabric (2€ - same thing, I only used about 0.40€'s worth).
The (fake) leather parts are from a thrifted belt (0.20€) and my old backpack (which I'd previously used parts of when making this smaller backpack).
- The longer zipper is from a thrifted hoodie that I'd previously slashed into pieces for other sewing projects (like the the totoro pockets of this dress). The hoodie cost me 1€ when I bought it, so the zipper is like... 0.10€?
- The shorter zipper for the outer pocket is thrifted (0.20€), as well as the zipper for the pocket in the lining (0.20€).
- The nylon strap pieces are thrifted (0.50€).
- The inner pocket is leftovers from making pockets for my winter coat.

So, all in all this backpack cost me... something like 7€, including things like electricity and thread etc. Pretty cool. ;)

And here it is! 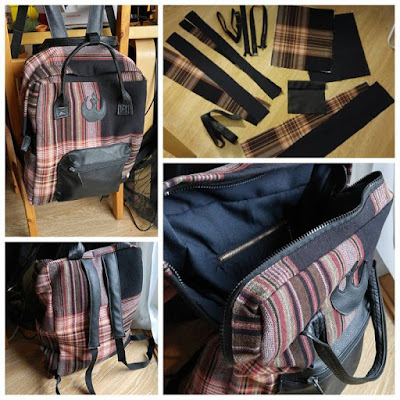 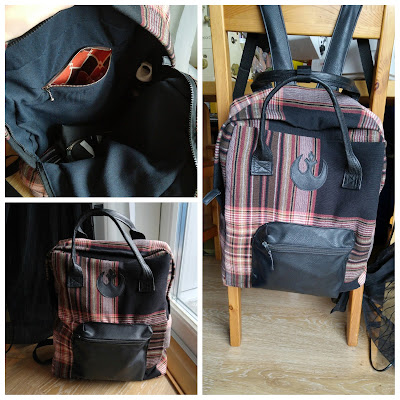 (Note the Star Wars Rebel Alliance logo. Apparently I am incapable of making a backpack without some kind of geek reference.)

So this was just a quick back-to-school-after-the-holidays project. I probably won't have that much time for sewing for a while because I got a shitload of courses and a BA thesis coming up. But I'll try to make time for some sewing projects anyway (and most likely I'll end up doing more sewing than studying, because what better way to procrastinate than sewing, eh? :D)