Heya,
Recently I became part of a Facebook group called "Make Thrift Buy Community Challenges", which is a group created by the wonderful Annika Victoria. She hosts a YouTube series called Make Thrift Buy, in which she recreates suggested clothes and accessories by being awesome and thrifty. The Facebook group is a group in which the members vote on what piece of clothing we should try and make for ourselves. Then we get creative, make the chosen piece whichever way feels best for us and share the results with the group. It's a lovely community and I'm happy to be a part of it.

That said, this month's challenge was a deer hoodie, which looks like this: 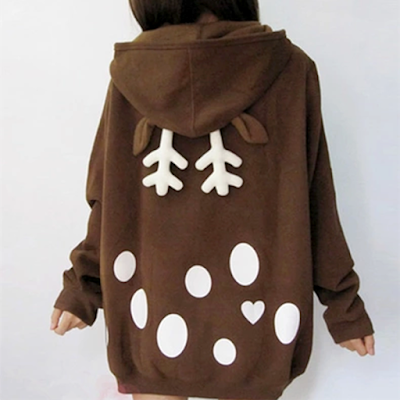 
I am not really a hoodie person, as you might be able to tell by my blog, so I decided to do something else deer-related instead. 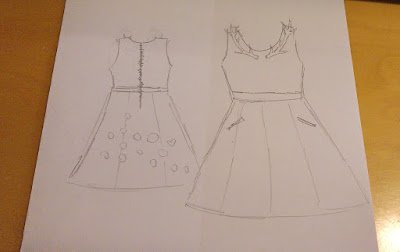 I found like 6 meters of brown corduroy at a secondhand store for 6 euros and a piece of cream colored fabric for 1 euro. 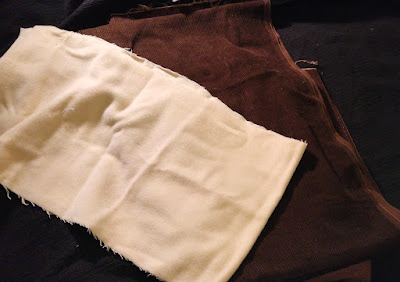 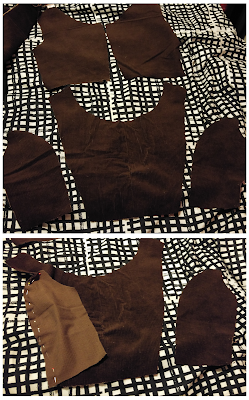 ...and pieces for the skirt part: 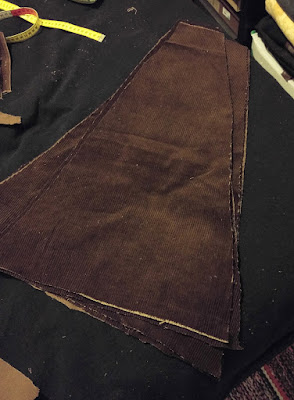 I sewed the top pieces and made a facing for the neck and arms. 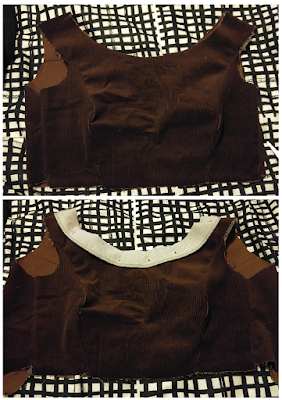 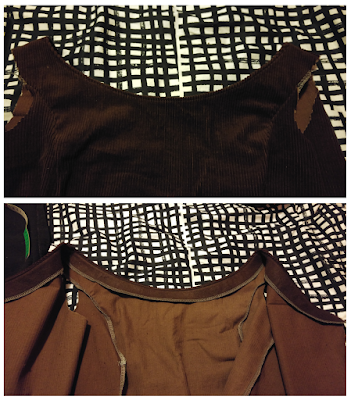 I then assembled the skirt and inserted a waistband: 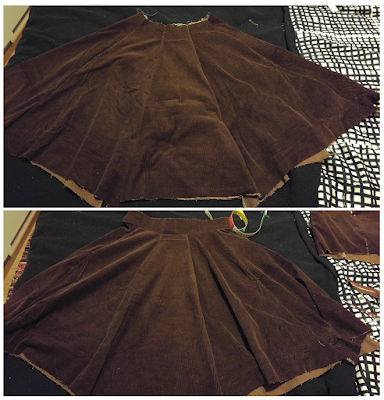 Since the hem was angular when assembled, I simply measured 57 cm from the waistband down all over the skirt to get an even hem and serged around the entire thing. 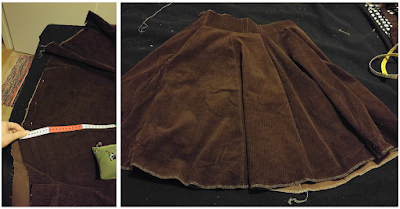 So then when all sewn together, the dress looked like this: 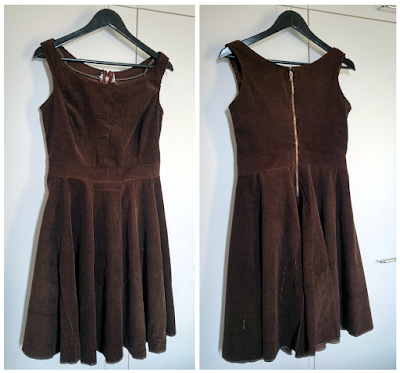 
So then I moved onto the antlers and other decorative pieces.

I measured the length and curve the antlers would have to be to fit the neckline and drafted this:

It's drawn on self-adhesive plastic, because then it was easy to stick it to a folded up piece of fabric and cut out four identical pieces: 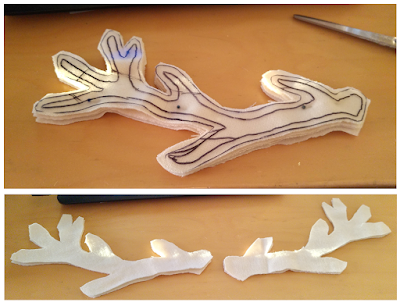 I first tried to sew one pair together right sides together and turn the piece inside out, but the fabric was too thick and the antler details too small for that to happen. It was a disaster, so I tossed that. I traced and cut two more, added some iron-on interfacing to prevent fraying and then sewed the pieces together right sides out. I trimmed the seam allowances and then I had these:

I figured out the placement of the antlers, attached them with some pins and then hand-sewed them onto the dress. I used kind of a blanket stitch to further prevent the edges from fraying.

Seriously, it took me 7 (seven!) Stargate SG-1 episodes before the antlers were attached. I chose SG-1 to pass time because I've seen it all before so I was able to look mostly at what I was doing with my needle and didn't need to pay much attention to the screen. So it was all, stitch-stitch-stitch-laugh-at-O'Neill's-jokes-stitch-stitch-Teal'c-is-awesome-stitch-stitch-stitch-- ad infinitum.

(Have I mentioned how much I hate sewing things by hand? Well, I'm mentioning it again. And this little ordeal didn't really change that for the better...)

But then again, the end result just might have been worth it. 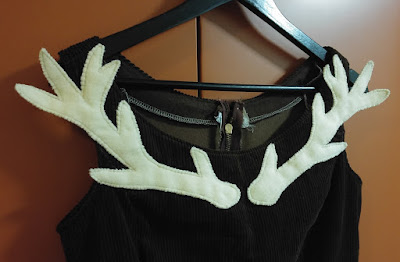 Then I cut out some circular shapes (and one heart like in the original hoodie) and kind of splashed them onto the back of the dress. 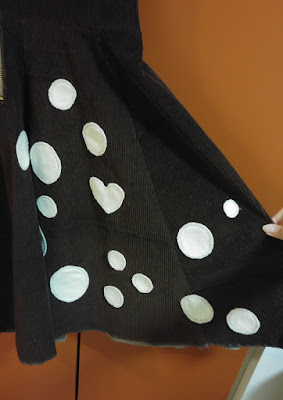 I sewed the pieces on with my sewing machine (because I was so done with hand-sewing) and used some fray check for prevent the edges from fraying. Then I just needed to hem the dress by turning the serged edge over once and top-stitching over it. And it was finally done!


So here is the finished dress: 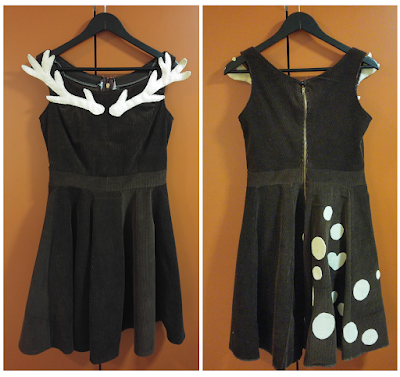 (I was supposed to make pockets but I got lazy, but since the pocket type I was thinking of making is a single welt pocket, that can be easily added later on if I want to.)

And here's me rocking my dear deer dress! 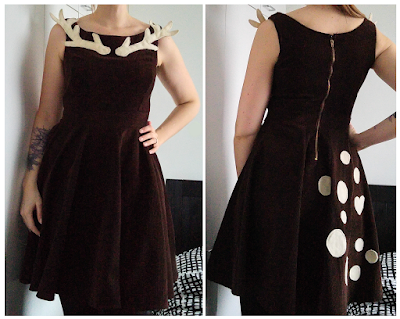 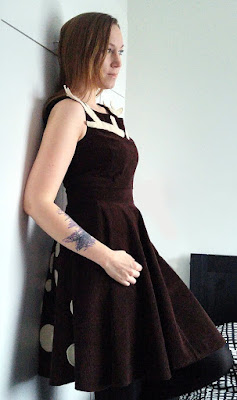 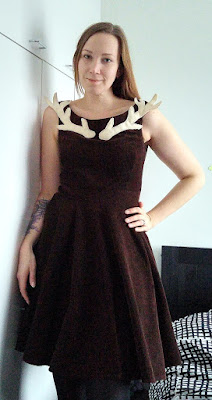 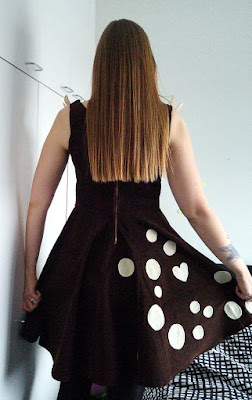