Hey everyone!
So I have a formal event coming up soon. One that requires a formal dress, floor-length, all that yada-yada.

Since I didn't have any suitable dresses, I decided to embark on a mission to make one. From all-secondhand materials.

Now, I could have just made a simple dress, a modification from my previous dresses, but I decided I wanted to make a corset-top dress. Cinderella style. Because why not? I mean, how hard can it be?

I thought of Cinderella because I had like 8 yards of light blue shimmery fabric I'd bought secondhand, so I thought I could use that. I also had about a yard of another blue fabric I had left over from my Margaery Tyrell cosplay last year. So I decided to combine all this blueness and make a formal dress, almost like a ball-gown. With corset bones and all.

I found inspiration in Angela Clayton's blog. She is an amazing seamstress and designer who makes historically inspired dresses and costumes.

I started by tearing apart a corset which I already owned (it was broken so I couldn't use it anymore as it was). I salvaged the metal boning and the back piece with the eyelets where the lacing goes. I also used the corset to make a tentative pattern.

Here are the pattern pieces: 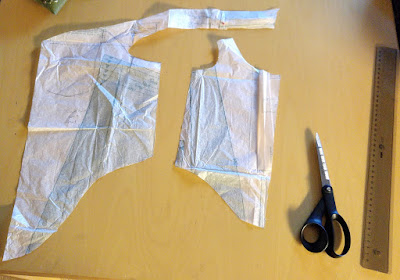 I used the pattern to make a mock-up from an old bed sheet. 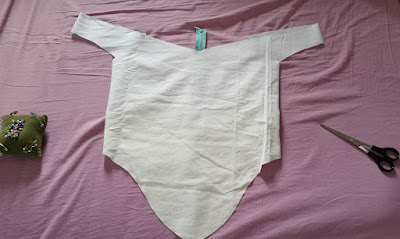 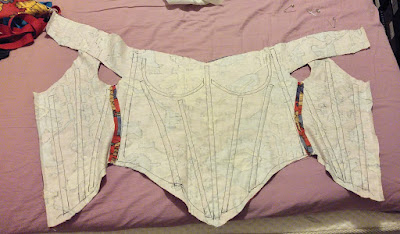 I cut and sewed together the fabric that would be on the right side. I pinned it onto the corset base to be sewn on by hand. 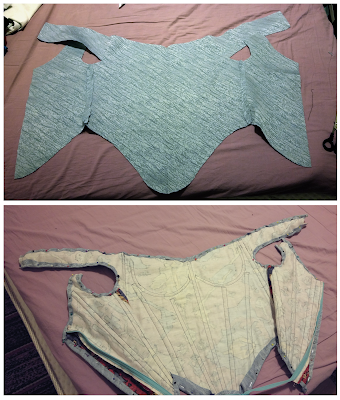 So then I had this: 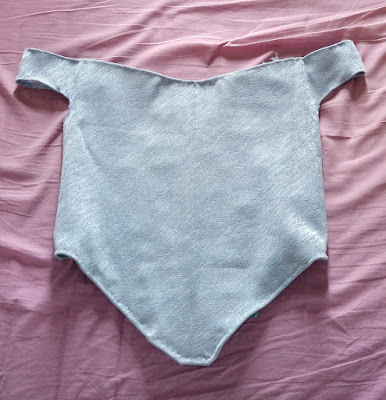 I attached the back pieces with the eyelets and pinned the lining, also to be sewn on by hand. 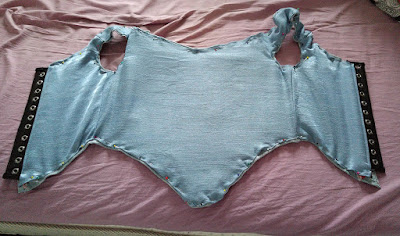 For someone who hates sewing things by hand, this was a courageous mission to embark on... Luckily I had something to keep me sane whilst sewing. Meaning, Stargate SG-1. Oh, I watched a lot of SG-1 during this process. 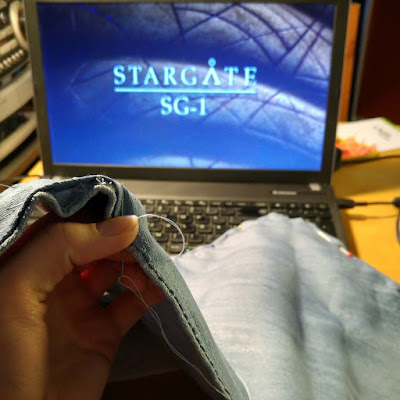 After the lining was sewn on, the bodice part was completed and ready to be laced. 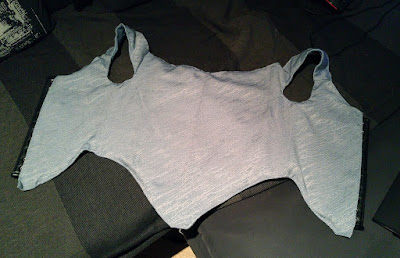 Sure, I'd tried the bodice on throughout the process, but this was the first time I got to put the completed bodice on, lacing and all.

Here's how it looked: 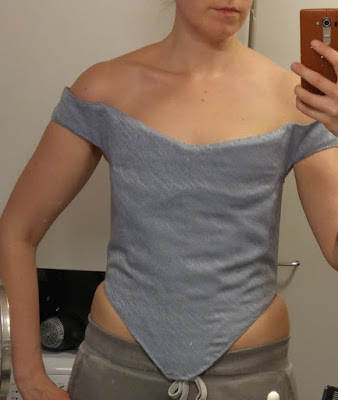 (My pants are extremely stylish and go so well with the corset bodice, don't they? :D)

Here's the back laced: 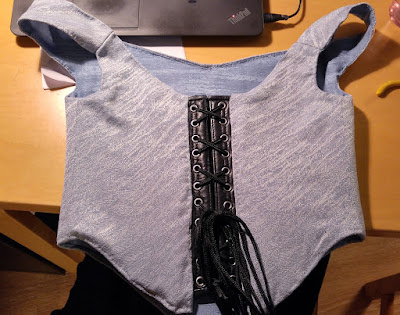 Then I decided the bodice needed some sprucing up. Some decorations, something.

Beads it is, then.

I rummaged through the DIY bins at the nearest secondhand store and found two unopened packages of beads (see-through gray and deep violet) for 1 euro. I also found a necklace made of multiple rows of black and clear beads for 2 euros. So I cut the necklace to pieces and I had more than enough beads.

But what to make with the beads? I have a slight aversion to the typical floral beading patterns, so I decided to come up with my own...

Inspired by May-Britt Moser's Nobel Peace Prize acceptance "Neuron Dress" by Matthew Hubble, I decided to make neuron bead pattern. After all, it does match my tattoo.

So, I used pins to mark an approximate pattern of neurons onto the front of the bodice and started beading. 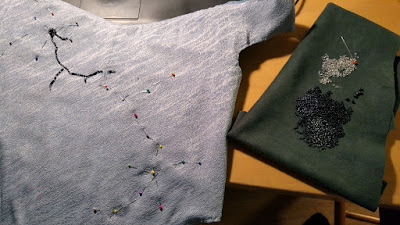 (Note to self: those beads are crafty mofos with a tendency to make a run for it. I dropped like 50 of them on the floor throughout the process, and even though I managed to find most of them I'm fairly sure I'll find beads in this apartment at least for the next few months. I found a few in our bed already, and that's not even in the same room than where the beading happened...)

Anyway. The beading was a slow, tedious process, but thankfully Stargate SG-1 was there to save the day. Or more like days. I estimate that I used something like 15 hours for the beading. I mean, I watched 19 episodes of Stargate while I was doing it, so I'm basing my estimate on that :D 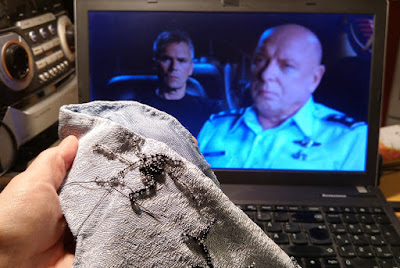 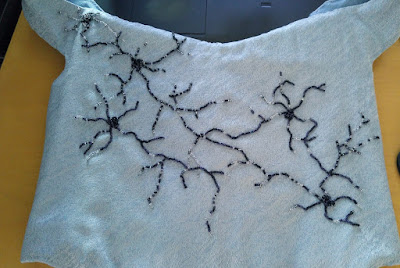 Here's how it looks worn (I paired it with a random skirt just to see how the bodice will look with a full skirt): 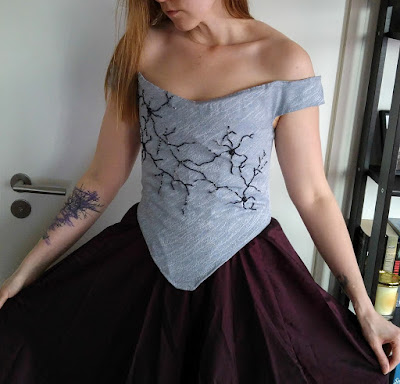 Then it was on to the skirt!

Like I said, I'd found about 8 yards of this blue fabric: 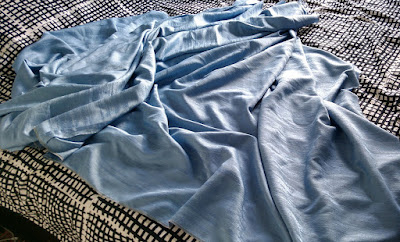 I cut out three full-widths of the fabric, each piece 140 cm long (about 55 inches). I cut the pieces 140 cm because I needed enough length to fold the top over several inches for cartridge pleats, as well as the bottom for hemming.

I sewed the three panels together so I had a massive piece that was 450x140 cm (something like 180x55 inches).

I serged the top and bottom edges to prevent fraying. Then I put a 5 cm (2-inch) strip of iron-on interfacing approximately 5 cm from the top edge across the whole 450 cm width. I folded the top over the interfacing and then proceeded to do cartridge pleats all across the top edge (except for the mid-front, where I put one bigger box pleat). 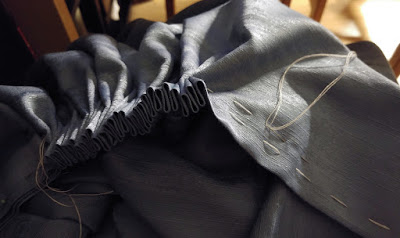 After completing the pleats I made some bias tape and hand-sewed it on the pleats so they'd stay in place.

At this point I realized something that made me feel very weird...

I suppose watching all those Stargate episodes might have something to do with it - I've now associated hand-sewing with Jack O'Neill's jokes, and hence hand-sewing is no longer that awful.

I like how hand-sewing sort of gives me total control and I can place stitches in places where no sewing machine could. Also it's grown to be kind of soothing to sit and hand-stitch something. I don't know what happened, but I feel like I won't be avoiding hand-sewing as much in the future. 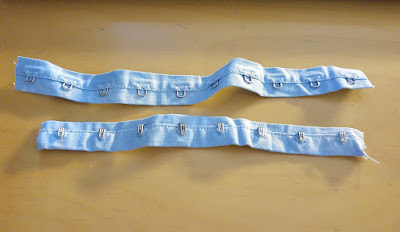 Here's the top of the skirt finished. The visible stitches on the bias tape look awful, I know, but they will be covered by the bottom edge of the bodice so I didn't bother to make them pretty. 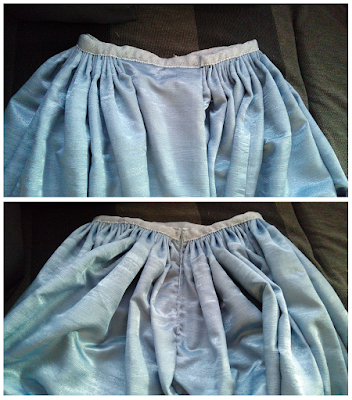 Now all there was left to do was to hem the skirt. I decided at the last moment that I would keep the dress as a two-piece and not sew the bodice to the skirt (I might still change my mind, but at the moment I'm liking them separate, as I feel it gives me more opportunities to use the pieces).

I also need to make a petticoat to make the skirt a bit fuller-looking, but other than that this dress project is pretty much done.

Here's a few pictures of what it looks worn (the skirt isn't yet hemmed at this point and it lacks fullness because there isn't a petticoat underneath, but other than that it's finished). 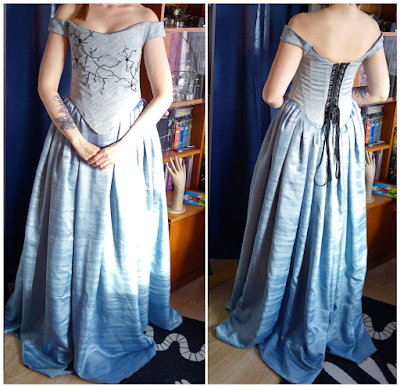 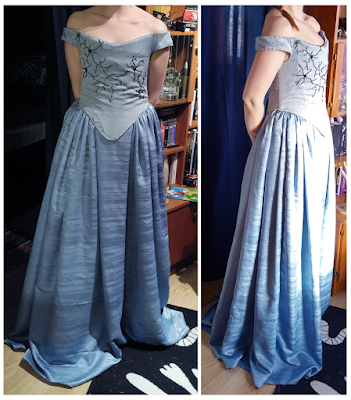 
I am quite pleased with how this turned out, being my first time making anything with corset boning and all. And time-consuming as it was, this project was amazingly cheap, material-wise.

Total cost of the materials: less than 15 euros.

Of course, counting the hours I spent on this and calculating an hourly salary if I were to make this to sell it... well, the price would be something like 600 euros. So yeah, the material costs are the tiniest fraction of the price when you purchase something that's handmade. Ever since I started sewing for myself, I've had a growing respect for the people who sell their beautiful handmade creations; and I totally understand where the (often sky-high) price is coming from.
...Well, I understand it, but I personally can't afford it. :D

Sometimes I think I started sewing because I lack the funds to buy stuff tailored / handmade. Sure, it takes time to make your own clothes but at least you get exactly what you want (and buying almost everything secondhand like I do really helps to cut down the costs as well.)

Posted by scoundrel at 8:28 PM