Unleashing my inner fangirl: Lord of the Rings dress

So, my local Goodwill had a holiday sale a few days ago. Everything in the store was -50% off. So naturally I attacked the fabric section and came home with a bagful of fabric - and no place to put it. The assigned spot for my fabric stash is, well, full of fabric. Well, then I decided I had to use some of the fabric I purchased right away, so it wouldn't take up space among the other fabrics. Logical, eh?

Denim is all the rage now, right? So when I found this very light blue (or light blue/gray) denim for 1.5€, I grabbed it: 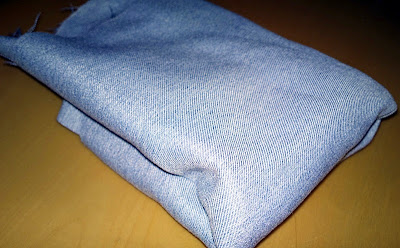 Since it doesn't look like traditional denim (mainly because of the light color), I decided it would do well as a dress. It's not super thick denim either, but rather light yet non-stretchy.

So next morning, I sketched a rough pattern for a dress with a half-circle skirt as the bottom. I usually make full circle skirts because I like them best, but this time I didn't want there to be too much of fabric. See, I had a plan to add a stenciled picture on the hem, and if the skirt was full circle, the excess fabric would hide half of the picture in the folds when wearing the dress. So, half circle it was.

I found this awesome calculator for different circle skirt measurements. I mean, you can calculate them yourself pretty easily, but if you're lazy and suck at math like me, then this is your best friend. Essentially, I just needed the radius of the smaller circle (the waist part), and then I measured 55cm from the circumference of the smaller circle to make a skirt that falls just above my knees.

Here's a rough pattern of what I did, and please don't laugh at my Paint skills :D 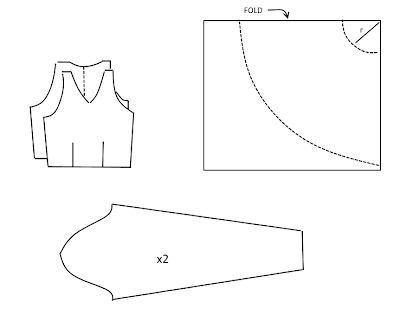 Yeah, I'm aware that the sleeves are huge in comparison to the other illustrations, but meh. :P


I used an existing dress to measure out the top of the dress, so basically I just laid the dress I already had on folded fabric and cut out two pieces (with seam allowance) and then cut the front piece neckline into a V shape. I lined the neckline, added darts and sewed the shoulder seams together, but left the side seams open because I wanted to add sleeves.

So, then I added a zipper and hemmed the sleeves and the skirt hem. And it was done: 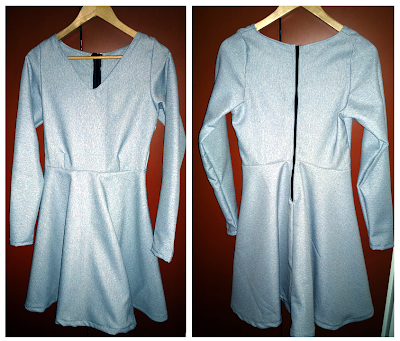 So then for the stencil picture. As a background story to this, I just went to see The Hobbit: The Battle of the Five Armies in the movies, and that was such a huge disappointment for me. So basically I ran back to my Tolkien books and wanted to hug them for comfort (maybe I did. Just a bit. Don't judge, okay?). And since the LotR movies were actually pretty good, especially in comparison to The Hobbit, I decided to pay tribute to them (but mostly the books. Oh, yes, the books.)

So I found this silhouette picture and figured it could be turned into a stencil: 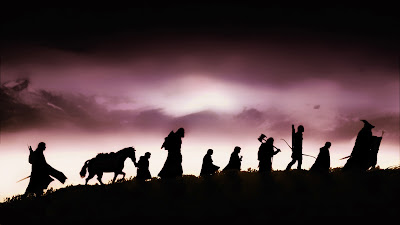 So I measured the front hemline of the dress, enlarged the image, then drew the stencil in permanent market on self-adhesive book cover plastic. I actually held the plastic sheet against my laptop screen and drew it through. :D I had to adjust the stencil because the hem of the dress is curved, but that was easy - I just drew the hem curve on the plastic sheet first and then started from the middle and drew outwards, adjusting to the curve as I went along.

This is how the stencil turned out:

Then I just had to cut out the stencil. I used an X-ACTO knife and small scissors. When I was done, I peeled the book cover and attached it to the hem of the dress, then painted over it with black fabric paint. I waited a moment and then carefully peeled the stencil off the fabric. 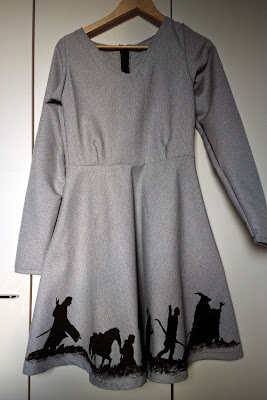 It turned out pretty damn awesome, don't you think?

Here's me rocking the new dress: 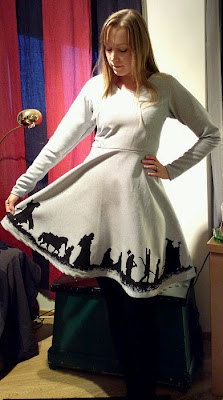 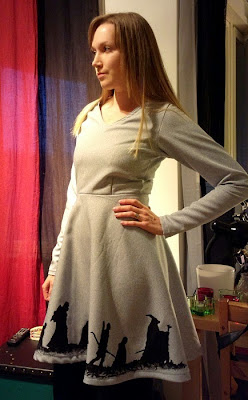 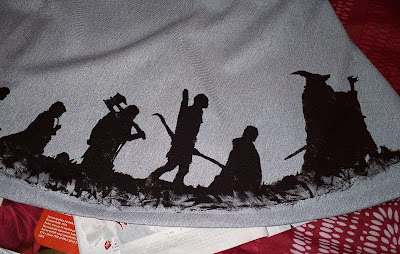 So, that kind of a DIY project this time. :D


I can definitely see myself wearing this dress a lot. I don't usually go for the print stuff, but this is nice without being too aggressive. It's the perfect way to flaunt my adoration towards J. R. R. Tolkien. ♥