So yesterday I posted a style inspiration post about Pretty Little Liars and particularly, Spencer and Aria.

Today, I decided to try a detail that I spotted in one of Spencer's cardigans: 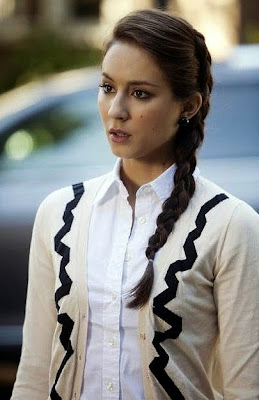 I love that ribbon detail that's been sewn on both sides. However, as I'm not that much of a cardigan person, I decided to dig through my closet to find something I could add a ribbon detail on. I found an old black dress that is made of stretchy fabric. I bought it from a sale a while ago and it's too big for me so I've mostly used it with belts and such. 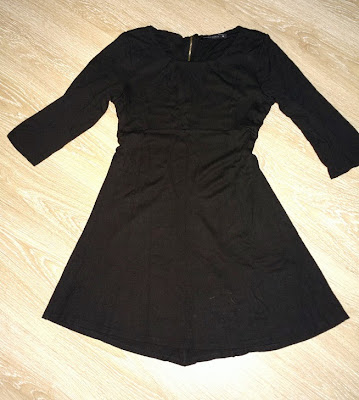 I had to take the sides of the dress in a bit to be able to wear it without a belt, so I did that. I turned the dress inside out and put it on, then pinned the sides and sewed them. (I took it in about two inches on both sides, so it was definitely too big for me.) 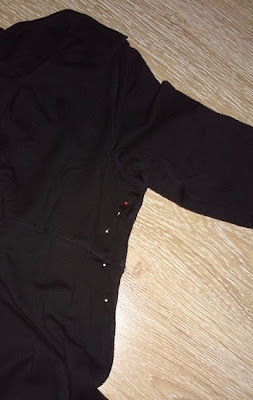 Then it was time to splash the ribbon on and pin it. I wanted to put the ribbon running down on only one side of the dress instead of both. At first I went for a red silk ribbon, thinking it would look cool... 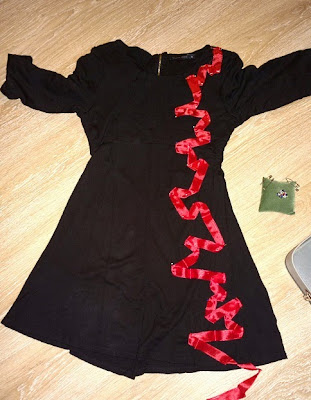 ...well, it did look cool. Too bad I immediately associated it with something. "Something" being this: 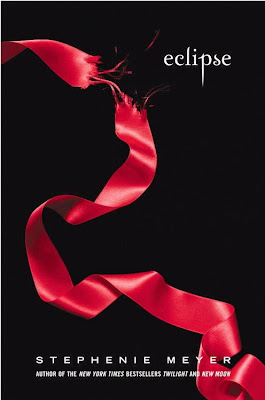 So, I started over again with a cream-colored cotton bias tape. I pondered between silk and cotton and having seen how the silk looked on the dress I decided that cotton would look better. It was as if the silk ribbon made the dress look too "fancy" for everyday use, and I definitely wanted to keep it as an everyday dress. Maybe if the dress itself was of a fancier material I could put on silk ribbon, but the stretchy fabric is not very fancy-looking... well, anyway, so cotton it was. I took off the red silk and replaced it with cream color cotton. 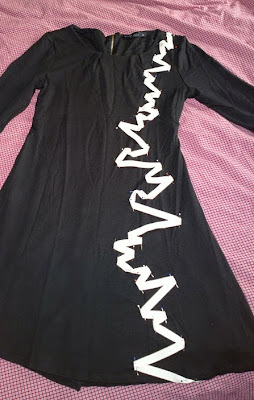 
So then I sewed the bias tape on. It was a huge motherf*cking pain in the ass to do that, I can tell you. I had to stop every few stitches to lift the foot of the sewing machine in order to change direction sharply. I first sewed down one side of the ribbon... then, cursing and moaning, I did the other side. And when I was done and pulled the ready ribbon-detailed dress out of the sewing machine, I forgot all about how much of a pain it was to make, because it came out so awesome. 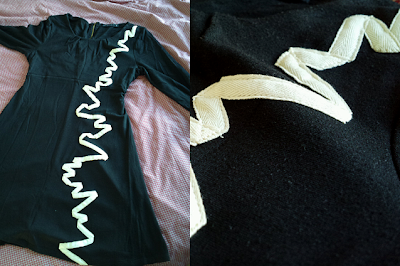 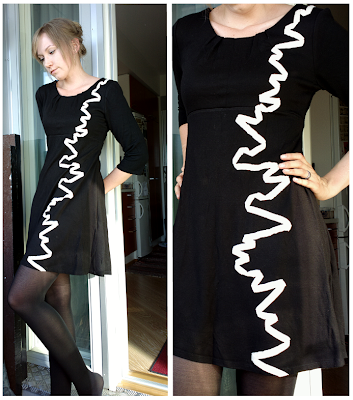 
So yeah, I took the idea of Spencer Hastings' ribbon detailed cardigan and turned it into an awesome ribbon-detailed dress. Now I feel like I want to add ribbon details to every shirt and dress I own, because this dress looks seriously awesome.

...except for when I think about it, no. Sewing that detail on was such a pain that maybe I'll just let this dress be a unique piece. :P

Posted by scoundrel at 6:38 PM